Growth and Opportunities in the U.S. Could be Slowing

Growth and Opportunities in the U.S. Could be Slowing

As such, underserved markets can be a fiscally sound investment opportunity, especially at a time when growth in the U.S. may be tightening.

Losses Likely in the U.S

The past few years have been profitable for U.S. financial markets, but this is changing fast. Stagnant economic growth and soaring inflation have left investors exposed and have given the Fed little choice but to raise interest rates.

In July 2022, the Fed delivered a second 75 basis-point rate hike. This historic increase emphasizes how far the Fed is willing to push the economy as it takes the fight against inflation into overdrive.

Though the Fed is attempting to engineer a soft landing, a U.S. recession remains a real risk. In the last 11 tightening cycles, the Fed has only successfully avoided a recession three times. During each of those cycles, inflation was lower than it is today.

According to the latest estimates by Bloomberg Economics, a downturn by the start of 2024, is highly likely – close to a three-in-four probability – as the economy absorbs the full impact of the Fed’s unprecedented interest rate hikes. 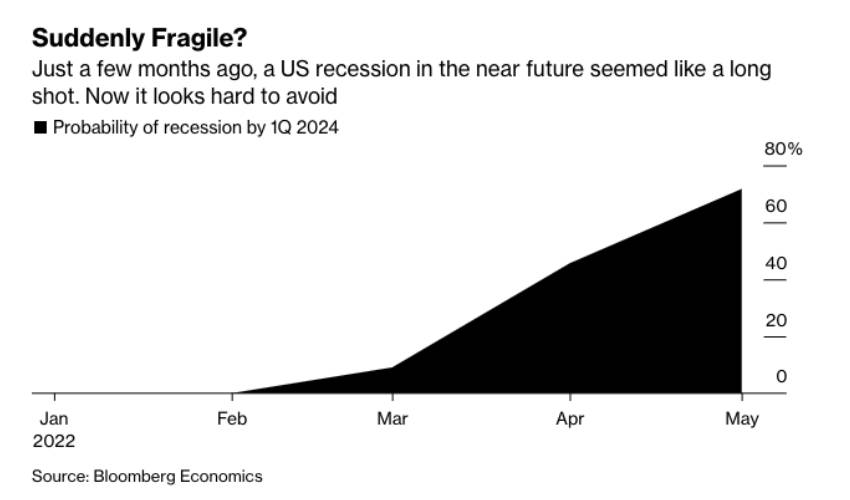 Meanwhile, consumer sentiment has plummeted. According to a survey from McKinsey & Co., 30% of respondents say they are feeling pessimistic, and that we may be headed toward one of the worst recessions we’ve ever seen.

This outlook has made some analysts and market participants nervous and seeking opportunities to diversify their investment portfolios by looking to emerging markets and early-stage companies.

According to U.S. Census Bureau data, the number of Americans ages 65 and older will more than double over the next 40 years.

The country will reach that demographic milestone in 2030 when all Boomers – roughly 20% of the nation’s population – will be over the age of 65. By 2034, older adults are expected to outnumber children for the first time in U.S. history, meaning the country will be grayer than ever before.

An aging population results in slower labor force growth that affects economies in many ways—the growth of the counties’ GDP slows, working-age people need to pay more to support the elderly, and public budgets strain under the burden of the higher total cost of health and retirement programs for older people.

Adding to this is the current skilled labor shortage in the U.S. which is causing the nation to fall behind other affluent countries in its progress towards digital transformation.

The lack of a clear digital transformation strategy, skills and know-how, and necessary engineering support are key factors that have hindered America’s progress. If left unaddressed, labor shortages in the United States could result in a loss of $1.748 trillion in unrealized revenue – equivalent to 6% of the entire economy.

Mitigating the talent crunch in the U.S. will likely require fundamental shifts in funding as well as how businesses and governments approach sourcing talent, providing data access and training-up skilled tech talent.

Under these circumstances, investors may choose to reconsider investments in the U.S. economy, as the output and consumption growth will slow in response to a declining population and insufficient labor force.

Understanding and appreciating these demographic and economic shifts will enable policymakers and investors to embrace changes that facilitate innovation and growth.

It has become clear that ignoring climate risks will put a financial burden on the economy as climate inaction is estimated to cost the U.S. $2 trillion annually.

“The fiscal risk of climate change is immense." -The White House Office of Management and Budget (OMB)

Candace Vahlsing, Associate Director for Climate, Energy, Environment, and Science at OMB, and Danny Yagan, Chief Economist at OMB recently discussed the agencies’ first ever accounting of how unchecked global warming would impact the federal budget, looking at its potential to dampen the economy as a whole, and balloon the costs of climate-related programs over time.

Based on current warming trends, the OMB predicted climate change could reduce the country's GDP by as much as 10% by the end of this century.

In other words, the U.S. economy could shrink. A lot. As such, climate risk translates into increased risks for investors. This is partially because climate risks are not fully priced into companies or their assets today.

For example, cleantech startups that are looking for solutions to address the damage of climate change don’t have valuations that reflect their potential. When carbon is fully priced in, capital expenditure decisions would be made with consideration to how much those costs will affect companies’ ability to make a profit from their investments.

In addition, investors are currently facing mounting concerns over funds seeking to profit from the rise in ESG investing practices and have misled shareholders over what’s in their holdings – a practice known as greenwashing, or exaggerated or false claims about ESG practices. Greenwashing can mislead investors as to the true risks, rewards, and pricing of investment assets.

However, the ability to get away with greenwashing will become more difficult as the Securities and Exchange Commission (SEC) imposes enhanced reporting and traceability requirements.

In May 2022, the SEC proposed two rule changes that would prevent misleading or deceptive claims by U.S. funds on their environmental, social and corporate governance (ESG) qualifications and increase disclosure requirements for those funds.

Similar controls in the EU resulted in 23% of funds that claim to promote sustainability being stripped of their ESG label, according to a fresh review by market researcher Morningstar.

It is clear that institutional investment decision makers and other capital market participants need standardized and increasingly quantitative ESG disclosures to integrate it into their decision-making process. Without this, ESG reporting has become a sticking point among some investors.

While the past decade of U.S. equity returns has been rewarding for investors—past returns are not indicative of what’s to come.

As the U.S. economy tightens due to interest rate hikes, an aging population and the impacts of climate risk, prioritizing underserved markets could not only help investors achieve higher returns, but also lead to the development of more innovation and technologies that can help preserve the planet for the next generation.