Immigrants, in their relentless pursuit of the American dream, strengthen that dream for every American. Through their contributions to many sectors of society, immigrants have played a leading role in building America into the most prosperous nation in the history of the world.

For example, immigrants have been responsible for inventing some of the most fundamental technologies in the history of U.S. innovation, which still influence our everyday lives.

Today, immigrants in the U.S. hold a disproportionate number of patents for new technologies. Additionally, over 3.2 million foreign-born entrepreneurs operate businesses in the United States. These entrepreneurs represent nearly 22% of all business owners – though they make up just 14% of the broader population – and employ about 8 million people.

Despite their oversized contributions to advancements in the U.S., today the potential pipeline of foreign-born talent is being blocked.

There is a Global Battle for Talent

The ability to attract and support foreign-born talent is key to America’s future, especially in the global race towards digital transformation.

Despite this, America’s convoluted and highly politicized immigration system has put significant roadblocks in the way of foreign-born founders.

At the same time, dozens of other countries are wooing foreign-born founders. Roughly 25 countries, including Australia, Germany, Portugal and the U.K., have offered startup visas and other perks in the past decade to help attract foreign-born entrepreneurs.

“There are more places around the world where entrepreneurship has taken off... so founders have more choices. And to the extent that [the United States’] immigration policies are not so welcoming, people don’t want to come.” - Jerry Yang (Taiwan): Net worth $2.4 billion, Yahoo.

Add to this the expansion of anti-immigrant policies in recent years—and the U.S. is in danger of losing its status as the place for immigrants to go to start a business and its edge in the global battle for talent and the innovation they bring to the market.

“America loses competitiveness gradually. It’s like a tire leaking air,” says Vivek Wadhwa, a fellow at Harvard Law School. “The fact is that the best and the brightest are not coming [to the U.S.] anymore.”

By inhibiting and preventing immigrant entrepreneurs from coming to the U.S., these policies are purposely putting the U.S. at a competitive disadvantage.

Minorities Overlooked and Underserved in Tech

Compounding the talent issue is the lack of opportunities provided to minority and first-generation immigrants within the U.S. tech industry.

Today, historically under-represented groups – including African-Americans, Latinos, Asians, Native Americans and women of all ethnicities – represent the fastest-growing segment of founders in the United States.

And while these founders are entrepreneurial and determined, the ecosystem [in the U.S.] is not conducive to supporting their success.

According to the Diversity in High Tech report from the U.S. Equal Employment Opportunity Commission (EEOC), the percentage of Black employees in high-tech industries is 7.4%, yet about 13% of the U.S. population is Black. Hispanic employees hold just 8% of jobs in high tech and 6% in biotech, but made up 18% of the overall population in 2019.

The lack of support for minority founders – including continued barriers to capital – is holding back both the U.S. economy and the nation's talent from reaching its full potential.

A Tech Talent Crunch Hinders Digital Transformation in the U.S.

As a result of blocking foreign-born founders while overlooking existing minority talent, the U.S. currently does not have the skilled tech labor needed to led global digital transformation. 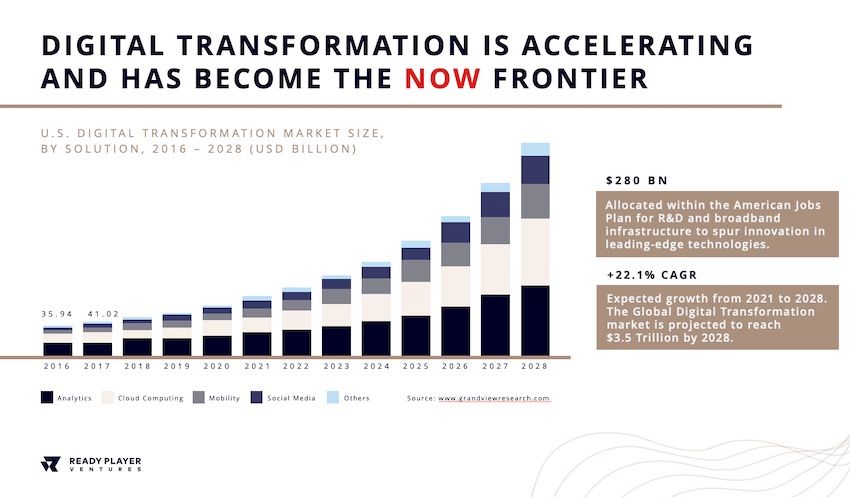 A lack of skills, know-how, and necessary engineering support needed to bring about digital transformation are key factors that have hindered America’s progress in comparison to other affluent countries.

If left unaddressed, the U.S. talent deficits could result in $1.7 TN in unrealized output by 2030.

The U.S. will not be able to close the gap if it continues to ignore the minority talent pools that exist within its borders while also putting up roadblocks that disadvantage qualified foreign-born entrepreneurs.

To shorten the tech talent gap, lead digital transformation and affirm its place as a global tech leader, the U.S. should bolster immigration policies to entice more foreign-born founders to settle in America while also increasing its support of minority founders and skilled tech workers with the U.S.

Could Historically Under-represented and...