Why Are Emerging Countries Leading the Global Adoption of Crypto?

Why Are Emerging Countries Leading the Global Adoption of Crypto?

Global adoption of cryptocurrencies rose by over 880% in 2021, according to research conducted by American blockchain analysis firm, Chainalysis.

Today, there are over 320 million crypto users worldwide. Global crypto adoption is expected to continue to increase at a rapid pace and some predicted crypto to reach 1 billion users by 2030. 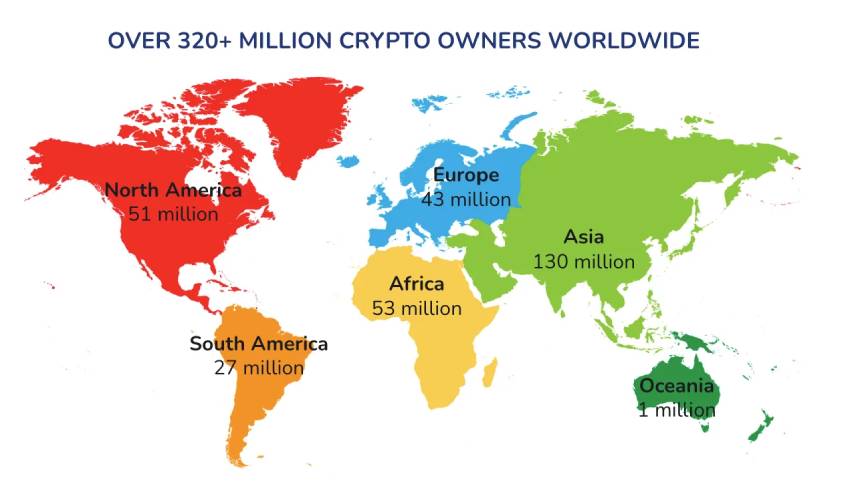 However, cryptocurrency has not been adopted at the same rate or for the same reasons across different countries and regions.

There are several barriers to overcome before digital currency will be accepted as sound money throughout the world, and some regions are moving ahead more quickly than others.

You might expect developed and affluent countries like the USA and the UK to be leaders in cryptocurrency uptake. However, data from the 2022 Statista Global Consumer Survey shows otherwise.

Nigerians also increasingly uses mobile money operations to either pay in stores or to send money to family and friends. Meanwhile, Polish consumers have been able to buy several types of products with a cryptocurrency since 2019 and in 2021, El Salvador made waves by becoming the first country to make Bitcoin legal tender allowing residents to pay taxes and settle debts with it.

The differences in the proliferation of cryptocurrencies around the world has been driven by notably different needs and use-cases, between developed and emerging market environments.

In developed nations with stable markets, crypto usage remains a novelty. However, in emerging markets, cryptocurrencies can help ease social and economic barriers and therefore have higher cryptocurrency adoption rates among citizens for daily use, mostly as a result of conventional currencies failing to live up to their promises.

“For developed markets [cryptocurrency ownership is] a hobby, for emerging markets it's a necessity. In emerging countries, people are lacking a lot of tools and infrastructure and are probably limited by political, geographical, technological and economic barriers.” - Lou Yu, KuCoin Labs.

National currencies in developing nations often fail to fulfill their dual function of acting as a medium of exchange and as a unit of account and are subject to unpredictable inflation, volatile exchange rates, stringent financial constraints, regulatory uncertainty, and expensive banking institutions.

These issues have contributed to eroding the credibility of fiat money in many emerging regions and have boosted the need for alternative forms of money including digital currency or, otherwise, access to more stable currency from other nations.

Cryptocurrency Impact on Economics and Immigration

It is a common observation that people living in frontier and emerging markets often emigrate to first world countries in search of better opportunities.

The reason for their immigration is typically not to seek status (many end up doing menial work below their education and skill level), but rather to seek stability of wages that are relatively free from the inflation and volatility of their home country.

If the world adopted a cryptocurrency standard, further global integration of people and systems would lead to a labor standard in which there is no significant gain in immigrating to a different country for low skill jobs.

Instead, people would have more options and incentives in their home country which could further build up and support their local economy. Moreover, investors would be able to more easily find and fund opportunities in developing countries without the risk of currency devaluation.

As the use cases for cryptocurrency and blockchain technology continue to evolve consumers across the globe are becoming more comfortable with and interested in digital currencies and the potential for cashless societies.

As such, governments and central banks worldwide are now exploring the possibility of using government-backed digital currencies or a Central Bank Digital Currency (CBDC).

CBDCs are controlled by a central bank, whereas cryptocurrencies are almost always decentralized, meaning they cannot be regulated by a single authority.

Today, over 100 countries—representing more than 95% of global GDP—are exploring CBDCs. Some researching, some testing, and a few already distributing CBDC to the public. For example:

The two main drivers of CBDCs are:

Additional benefits of CDBCs include:

However, the effects that a switch to CBDC would have on a financial system's stability are still largely unknown. For example, there may not be enough central bank liquidity to facilitate withdrawals during a financial crisis.

Also, central banks would need to implement monetary policy to influence inflation, interest rates, lending, and spending, which in turn affects employment rates. Central banks will need to ensure they have the tools they need to positively influence the economy.

In addition, whereas privacy is one of the most significant drivers behind cryptocurrency, CBDCs would require some amount of intrusion by authorities to monitor for financial crimes.

Despite the risks and drawbacks, the proliferation of different CBDC models—especially among emerging markets—is creating new urgency for international standard setting which is drawing more affluent nations into the conversations.

As such, the U.S. White House recently released an executive order calling for the responsible development of digital assets.

The history of money is entering a new chapter. Across the globe, people and governments are experimenting with new digital forms of money while also preserve key aspects of their traditional monetary and financial systems.

However, whether digital currency is regarded as a novelty or a necessity may depend on the economic status of each country. In emerging markets cryptocurrency payments have begun to solve the global income inequality problem for everyday individuals. For developed nations, crypto is more likely to be used to invest without borders and the headwinds associated with traditional financial institutions and systems.

As the digital assets market grows, many nations’ governments are exploring the possibility of using government-backed and regulated digital currencies, called CBDCs. But, how CBDCs will affect economies, existing financial networks, and stability is largely unknown.

As the industry matures and global adoption increases, emerging digital currency could create more equitable opportunities for people to build wealth and a life regardless of geography.